When fitting ships many players just buy the most popular module commonly considered the best option. Usually it's a faction module that originated from the NPC LP stores but many times there's another variation of the same module that's a drop, is just as good and much cheaper. For example take a look at Caldari Navy X-Large Shield Booster and the Dread Guristas version. 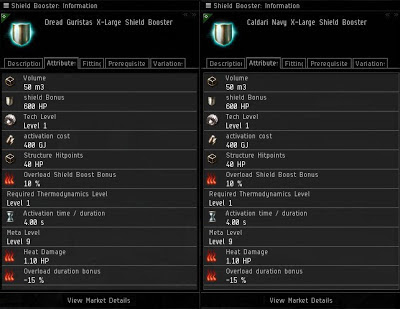 As you can see in the screenshot above they have exactly the same stats. Fitting requirements and skill prerequisites are also the same. Other than the name, they are identical. Now let's compare prices. 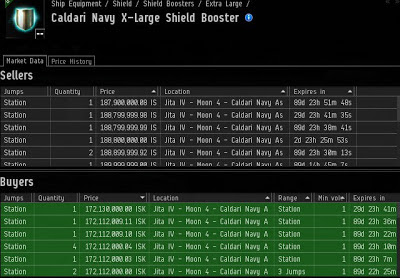 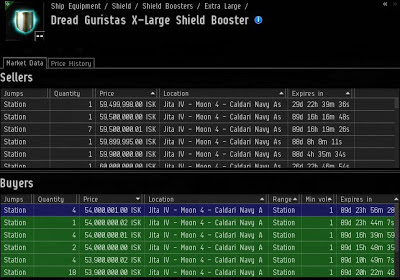 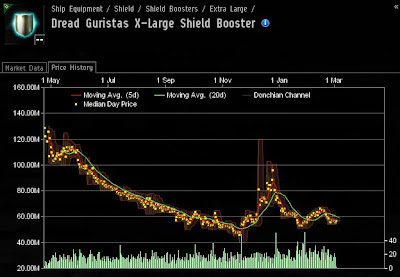 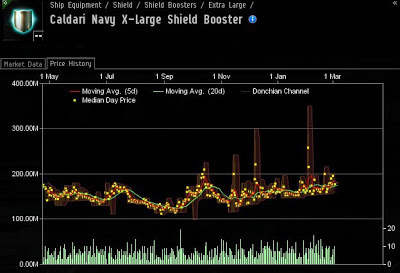 Volume isn't all that different either, around 10 per day for the Navy version and 20 per day for the Dread Guristas version. It is notable that the Dread Guristas version used to be priced roughly twice as high as it is now but has steadily gone down to present price levels. However, even at it's highest price it was still priced significantly lower than the Navy version.

Why pay 3 times as much for the same mod with a different name? Just buy the Dread Guristas version!

It's really tempting to buy out most of the Dread Guristas ones and reprice them. Timing is bad for me though, a major competitor (who I'm quite certain bots) seems to have taken a break, gotten banned, or changed up his inventory. I've been swamped with cheap bulk buys on multiple items the last few days. It really picked up last night and cash is running a bit low. I made about 4 billion in the last 12 hours alone and still have billions more in cheaply acquired stock to move.