About those Exhumers skill books

This is going to be a quick post.
You may have noticed Exhumers skill books disappeared from NPC skillbook venders with the mining changes a while back. Since then a few players have been buying them all up and reposting for obscene prices.

CCP has been utterly silent on the matter. They won't say if it's intentional, a bug, or even if they'll be back on vendors eventually. Nothing but complete silence.
The thing is there's absolutely no reason to pay these crazy prices since you can still direct inject the skill from your skill sheet into your skill queue. Simply open your skill sheet, go to Spaceship Command, drag the Exhumers skill into your skill queue and this dialog pops up: 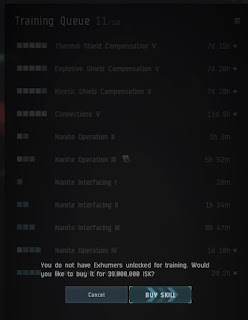 Click "Buy Skill" and it only costs you 39 million ISK instead of getting ripped off for over a billion on the market.
Posted by MoxNix at 21:44 2 comments:

A few months ago one of my Unreal Tournament friends was asking some questions about playing the market in Eve. That got me curious about my old accounts so I logged in to one of them to check it out. One thing led to another from there. Next thing I knew I was PLEXing all my accounts (with PLEX I already had from before) and restarting training queues.

One of the first things I noticed was that PLEX had changed. What used to be 1 single PLEX had been broken up into 500 smaller PLEX. I also noticed accounts now had Alpha and Omega states with severe limits on training and usable skills in Alpha state and requiring spending 500 PLEX a month for Omega state to lift the restrictions.

I posted a bunch of orders all over hisec / lowsec and even a few places in nullsec/deadspace/pochven to buy PLEX at around 2.2-2.3 million each. A lot of those orders got filled within days. If I'd realized at the time that PLEX was currently at the low end of the cycle I would have bought a whole lot more than the 60,000 or so I wound up with!

I also noticed broker fees and taxes had gone way up and there were player owned market hubs in many places with far lower fees and taxes than the old familiar NPC market hubs which I'd spent so much time and ISK on improving faction standings for to lower broker fees. Not being sure what to think of that or how it would affect my market strategy I decided to play it safe and not post many orders until I had a better idea of how the markets had changed.

I really didn't care for the player owned market hubs for multiple reasons which for the sake of brevity I won't get into here. However I was pretty much forced to use them in order to compete on buy orders.

About a month later, after a 2nd round of PLEXing accounts I started posting some more orders to test a few ideas and check out how the markets had changed. I bought a bunch of multiple training certificates to get 2 or 3 characters training new skills on most accounts too.

That was around the time I noticed the Margin Trading skill was gone, replaced by a new skill Advanced Broker Relations. That combined with the changes to broker fees and taxes made a big difference in how many orders I could post for how many items, at what prices and how often I could modify them. I didn't mind that at all it actually meant you had to have a strategy and post sell orders at sensible prices. Those who just mindlessly played the .01 ISK game with constant undercutting would very quickly be losing ISK.

Another month and another round of PLEXing accounts later I felt I had a pretty good handle on how things had changed and a strategy in mind for it. I spent an hour or two a day for a couple weeks posting lots of buy and sell orders and disrupting markets everywhere.

Then a few days ago (around the 26th or 27th of July) everything changed again... I was posting / modifying a few orders when I noticed the broker fee was well under 1%... Looking more closely I realized the order was on Jita 4-4 rather than Perimeter. At first I thought it must be a bug or glitch but I soon realized it was the same on all NPC hubs. If I had 0 standing with the station owning faction the broker fee was 1%, if I had positive standing (which most of my characters do) it was less than 1%. That's terrific, the best news I've had since coming back to Eve! Now when buy orders get filled I post replacement orders on the same old NPC hubs as in the past.

I've pretty much figured out my strategy for the future now. It'll involve getting out of some old markets and into some new ones. I'll probably get into skill point farming soon too, it seems like a very easy source of mostly passive income. All by itself it'd be more than enough to PLEX all of my accounts and add new ones every month.

One final note. One of my characters bought some PLEX on a player owned market hub in Pochven for something like 1.1 million each. The very next day I no longer had access to post on that player owned hub. That's no problem, Ichoriya suits me just fine and after the change to taxes and fees it's cheaper to post orders on Ichoriya anyhow.

Unreal Engine 5 was made available for early access earlier today.
UE5 Early Access
The engine itself is a 12GB download without any projects. The only UE5 example project out so far is Valley of the Ancient and that's a 98.9GB download.
It probably won't be very long before a group (or several different groups) of Unreal Tournament fans announce they've started working on yet another new fan made Unreal Tournament remake. Like the others before it'll probably never get anywhere near a finished playable game.
But we can always dream. UT5, Open Tournament 5 or whatever. Personally I think Tournament Royale (featuring a battle royale gamemode of course) has a nice ring to it.
Posted by MoxNix at 19:57 No comments:

Remake of DM-HeatRay from UT3 for UT4 Pre Alpha. 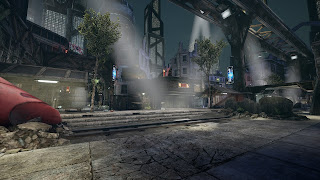 HeatRay was one of the maps included with the UT3 Demo and a very popular map in UT3. Though I never played UT3, this was one map I kept hearing players wanted in UT4 so I decided to try my hand at converting it.

It turned out pretty good. I'm very happy with the results and really starting to like playing the map myself now.

I mostly used the original meshes and textures though I did change meshes and materials for several decorative props like barrels, trash, trees, grass, ivy vines and ferns. Lighting is very similar to the original too. Layout is identical but scaled up to suit UT4 character scale and movement.

The DarkWalker is decorative only, it is not a vehicle like it was in the UT3 map. I did make a few item pickup changes, placing a redeemer underneath the Darkwalker, replacing Invisibility with Damage Amplifier and replacing 25 armor with 50 armor. 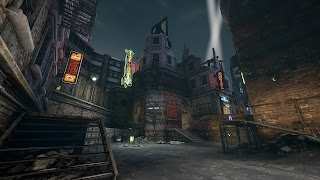 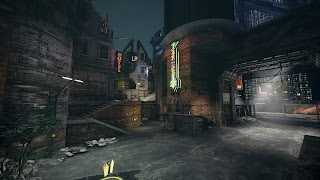 P.S Thanks to Barsam for running the UT3 map through UT4XConverter to extract the original assets for me.

After years of struggling with severe stuttering, hitching, freezes, etc., etc., and feeling like I'm playing with super high ping most of the time in UT4 I think I've finally found a fix for it.

I've tried multiple hardware upgrades, multiple fresh OS installs and countless tweaks over the years. Many things helped a bit but nothing ever got rid of it entirely. Then last night while researching the issue on Google I ran across a newer ini tweak I'd never heard of before that many players in multiple different UE4 games attribute to fixing similar issues for them.

And it worked for me in UT4 too.

To try the tweak yourself just open your Engine.ini file (found in Documents\UnrealTournament\Saved\Config\WindowsNoEditor) and add the following to it:

The last few weeks I've been doing a major rework of my original map DM-Laputa. 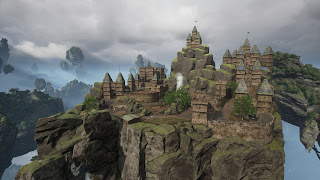 No that's not Spanish. The name was inspired by the anime movie  "Laputa: Castle in the Sky".

Just about everything has been reworked from layout, item selection / placement and spawns to meshes, materials, textures and emitters. The old version was far too open with great sightlines everywhere so I added a lot of sight blockers (rocks, walls, towers, trees, etc.) to fix that. There's quite a bit more vertical variation too, lots of level changes to make the gameplay more interesting and fun.

There are climbable (walkable actually) ladders in a few places and don't forget to try some barrel racing.

I'm waiting on feedback from a few testers before releasing a new version to the public but hope to release one before Christmas. Anyhow, way too much changed to easily list most of it here, so here are a bunch of screenshots. 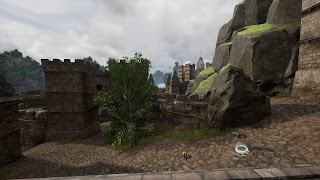 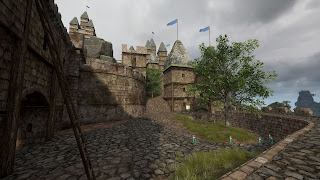 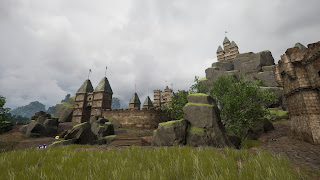 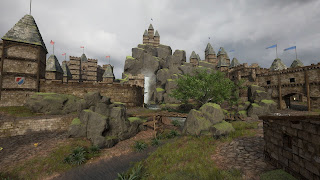 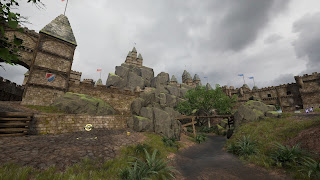 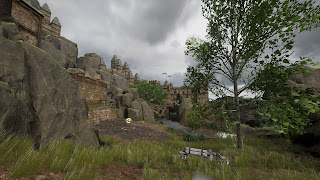 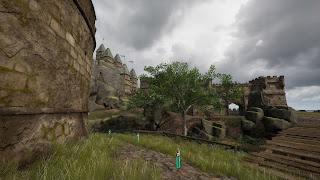 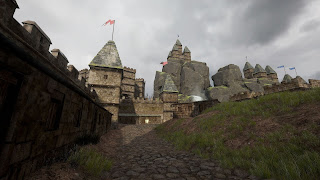 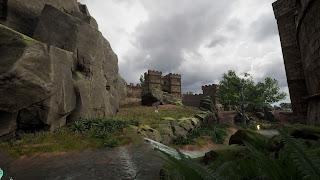 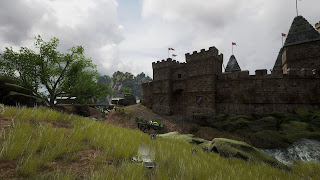 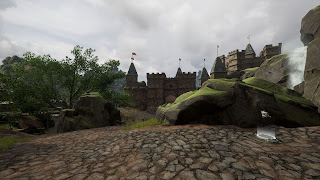 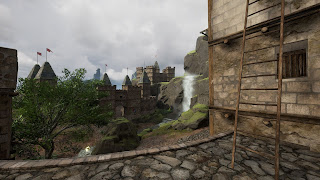 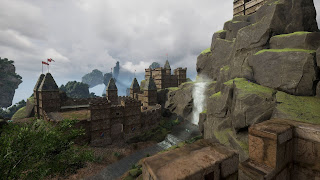 September free for the month

September has been a good a month for free UE4 marketplace asset packages. Besides the two mentioned in my previous post, the September "free for the month" packages were released a little later. I plan to use two of them. 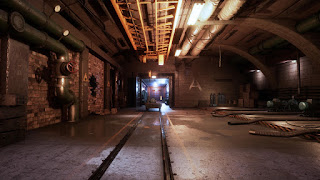 It can be installed on Unreal Engine 4.16 or higher and uses very simple materials so it's quite easy to down port to a lower engine version like 4.15.0 for Unreal Tournament 4.

Packing the demo map in UT4 filesize comes in at over 1.1GB but that's with a lot of 4k and 2k textures. By simply LoD biasing to reduce texture sizes to 2k/1k I got it down to a little over 120MB with not much loss of visual quality. Packing the metallic, roughness and ao textures into MRA maps would reduce it even further. 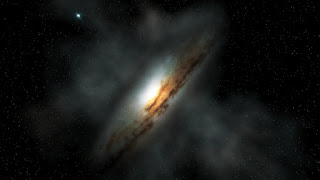 The other new package is Starsphere. Something that is very lacking in UT4. Similar to the skysphere blueprint only for space skies and more versatile.

This is a very small but quite good package available for UE4 4.12+ (I wish I'd noticed that before porting it by hand from 4.25 to 4.15). Besides the many adjustable parameters for stars, it has parameters for things like space dust, blackholes, novas, Saturn and the Sun. There is also a planet blueprint with panning textures that make the planets look like they're rotating with different speeds for surface and clouds, have atmospheres and includes textures for Venus, Earth and Mars.