Just a quick screenshot to show the PLEX business is going good. 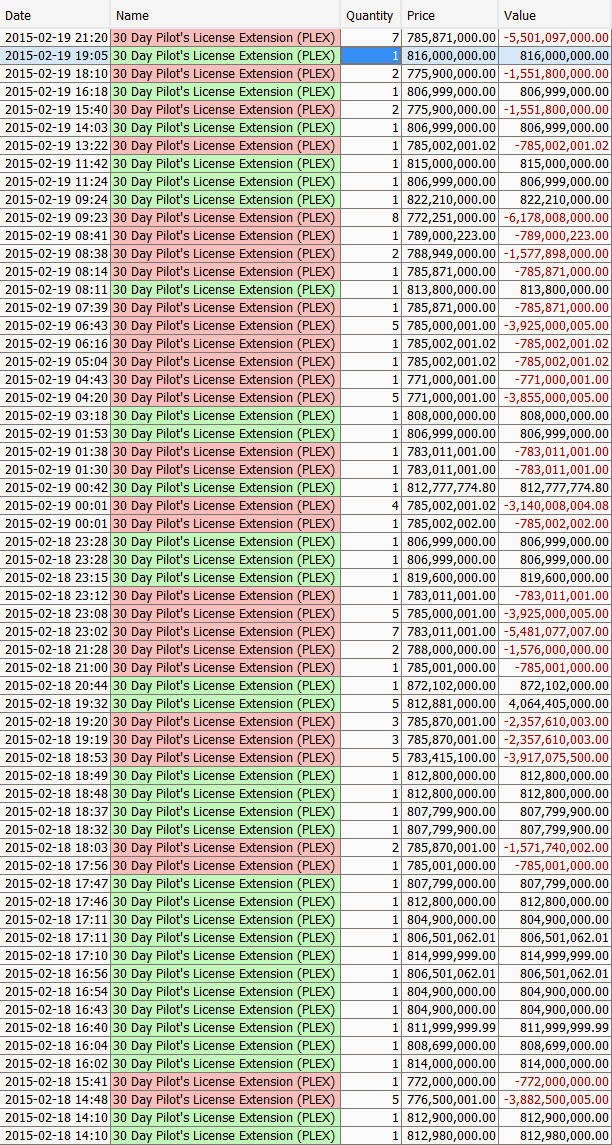 I'm slowly increasing my volume and making better than expected profits. Slowly grinding those broker fees down on more characters too. So far I'm finding as those fees go down both volume and profits per PLEX go up. I don't expect that to last long though. Once I have the fees down on all my traders I'll push even more aggressively for volume. At that point the competition is likely to get fierce and profits per PLEX will go down.
Posted by MoxNix at 19:01 2 comments:

I've been playing quite a lot of UT4 (Unreal Tournament 4 pre-Alpha) lately. While the game is still early in development the core gameplay mechanics are coming along and starting to give us a pretty good idea of what we can expect in the end.

I'm not sure I'm going to like the final result. The thing I liked most about the original UT is it was what I consider an inbetween game, a well balanced game that didn't favour one playstyle over another.

It wasn't just another twitch reaction game with absurd movement like Quake, nor was it a too realistic slow paced camper game like CoD.

It was in between those extremes, a game you could be successful at playing either way.

It wasn't all about long range instant hit weapons like the rifle, nor was it all about close ranged in your face fighting with rockets and flak.

In fact the best strategy was often playing to an opponent's weaknesses. If your opponent preferred close combat, fight him at medium or long range with sniper and shock. If he preferred long range combat, take the fight to him at close range with rockets and flak.

Then you had the mini, a terrific midrange weapon, very good at short range and as a finishing weapon but not so good at point blank range and weak at long range. And of course the extremely versatile shock which has always been UT's signature weapon and a favourite of better / more experienced players in almost any situation at almost any range.

Ever since UT2k3 the game has moved towards a Quake-like twitch game where the one thing that matters above all else is reaction time. Most of the time ping, hardware and configuration settings make more of a difference than actual skill. The guy with the lower ping and the least video/input lag wins.

In the original game you could compensate for that with various different strategy and tactics. And the guy with the ping/hardware advantage couldn't just fly across the entire map grabbing all the powerups in under 5 seconds either.

Now you can cross the entire map much more quickly. Strategy is pretty much just "whore the armor and spawn rape". If you control the powerups nothing else really matters much. And tactics have devolved to the platform jumper level of just moving quickly and unpredictably while spamming the fire button.

The shock rifle is insane right now. High damage, high rate of fire and extremely spammable. It's the only weapon that's good at any range and in virtually all situations. In fact about the only situation where shock isn't clearly best / tied with the best is at point blank range where flak beats it... But that'll likely change soon since all the shock whores are crying to nerf the flak.

Just about every match on every map is one giant spamfest with the better, more experienced players spamming shock (or maybe Flak) and everyone else spamming whatever they can get their hands on and get a few shots off with before dying again.

I don't care for the direction the game seems to be taking. It's turning into a 3d platform jumper with guns.

How about putting some of the skill back into it?
Posted by MoxNix at 11:07 No comments: 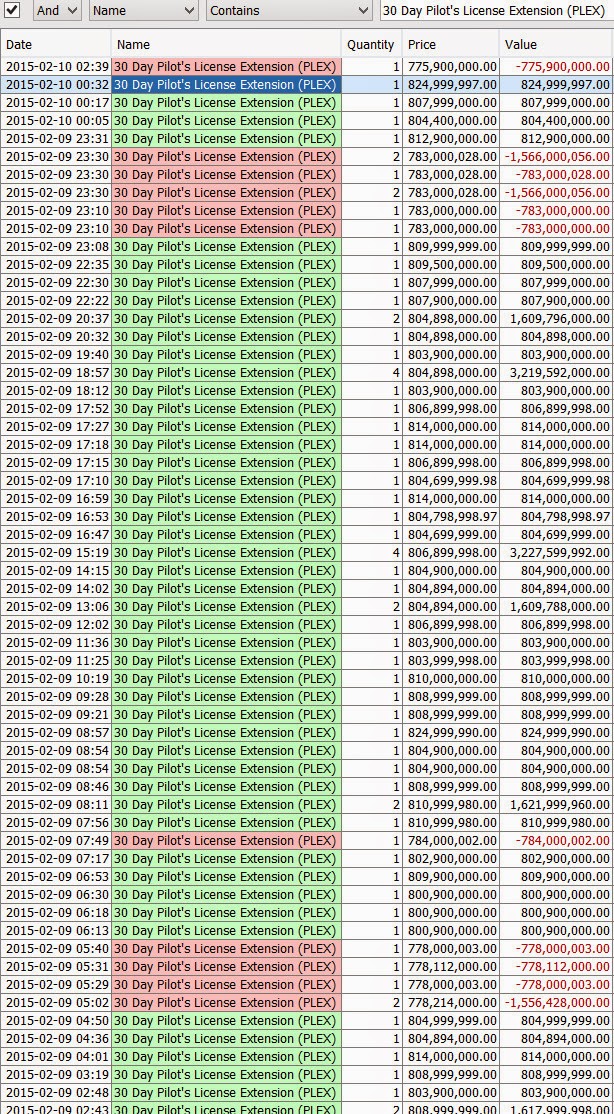 I'm looking to purchase an Eve Online character that has high standings with Caldari State faction. At least 8 and preferably 9 or 10.

Trading skills and Caldari Navy corporation standing would be nice too but aren't absolutely necessary. Nothing else matters, I don't care what other skills it may or may not have trained, the only thing that really matters is high Caldari State faction standings.

I'm almost afraid to ask just how much someone would want for such a character but I might as well find out.

If you don't have such a character for sale but know of one that is for sale, I'll pay a substantial finders fee to the first person to direct me towards any character I do wind up buying.

If prices aren't too ridiculous, I might be interested in characters with high SoE, Amarr, Minmatar and Gallente faction standings too.
Posted by MoxNix at 13:34 7 comments:

The PLEX Experiment - Ramping Up Volume

This is an update on how The PLEX Experiment - Buying and Selling PLEX for Profit is coming along.

I've been slowly increasing my presence in the PLEX market, testing theories and trying different things to see how the market and the competition reacts.

This weekend I got extremely aggressive in the PLEX market, increasing both the prices I was paying and how many I was buying in each of 22 different regions. I wanted to buy and sell a lot more PLEX than I usually do and see what kind of effect greatly increasing my sales volume would have on profits.

It worked very well on the buying side. On Friday I bought 63 PLEX, on Saturday I bought another 108 for a total of 171 in 48 hours. It looks like I probably can buy 100 a day, at least on the weekends.

Unfortunately sales weren't nearly as good, I only sold 17 on Friday and 18 on Saturday for 35 in total. Once I started selling more than 1 or 2 PLEX at a time anywhere the no-lifers and bots quickly came out of the woodwork and began undercutting me constantly.

It didn't take long before sell prices were down into the low 800 millions in most places and even under 800 million in some places (Jita for one).

Of course if I can't resell PLEX at a profit quickly enough, I won't be able to buy 100 a day for very long before I'm out of cash and sitting on stacks of PLEX. Many competitors will happily sell PLEX for 12 million markup and some even less. It looks like the key to doing any real volume (selling more than a few PLEX a day in any one region) is going to be grinding faction and corporation standing even more to lower broker fees even further.

Unless of course those competitors are bluffing and can't keep up the undercutting game for much longer. In that case I should be able to sell all or most of my PLEX during the next week and buy more the following weekend.

Strangely enough, one place were my PLEX sales did do very well this weekend (much better than usual) was Genesis. For some reason the Malma bot backed off on PLEX this weekend, but not on other things.

I've noticed several patterns in PLEX sales, some seem to be natural and others manipulative. The main thing is there's a weekly cycle (often hidden by manipulation) where prices go down on the weekend and back up during the week.

Though I can't prove it, I'm quite sure this is due to more PLEX being purchased for real money on the weekends and sold quickly for ISK which tends to bring prices down. Then during the week, fewer new PLEX enter the market, prices tend to go back up and many of the PLEX purchased on the weekend are resold for profit.

It's also interesting how shortly after I ramped up my business and grabbed more market share prices dropped significantly. That's not the first time that's happened either. It happens every time I try to sell more than 1 or 2 PLEX in the same region, prices go down and undercuts become far more frequent. To me that's a strong indication bots are very active in the PLEX market.

Then again, considering how much prices have dropped over the last 2 days and how the blocking orders have disappeared again, it's possible the market might be starting to crash. In that case I picked a very bad time to increase my volume and could wind up losing some billions or even 10s of billions.
Posted by MoxNix at 01:14 6 comments: