So there I was minding my own business on a 12 jump trip from Motsu picking up stuff scattered all over the region when I passed through the gank camp in Uedama.

As usual I was on auto-pilot and afk... During prime time on a Friday. Some ganker must've thought afk Blockade Runners are easy targets. 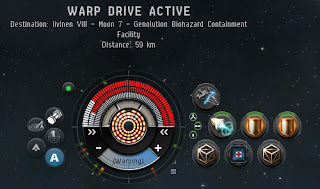 I made it all the way through and jumped out of Uedama on auto-pilot, he got Concorded and all it cost me was a 143k repair bill at the next stop. :)
Posted by MoxNix at 10:24 No comments:

Yesterday I said I'd disclose the name of a market  botter in my next post. Here it is, the botter's main character in Genesis is Vladimir Vladimirovitch Putain 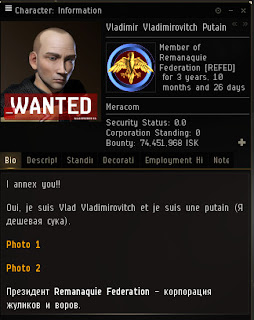 I've been watching this guy (or more precisely his orders) for a long time now. Over 2 years though I didn't know his name at first. Another player contacted me in private telling me he'd had the exact same problem with the same character over a year earlier (more 3 years from now). In fact that player told me the botter's name before I'd figured out who the botter was myself.

Vlad the bot is virtually always online other than once or twice a month when he goes offline for a couple hours. He responds to cuts on any of his hundreds and hundreds (more than one character's worth for sure) of orders within a few minutes... No matter what time it is or how long it's been since the last time someone cut him. Three minutes or 3 months, it doesn't matter, he'll nearly always respond within about 5 minutes at the most and often much quicker than that.

Here's an example from today. I logged in and raised my buy price on PLEX. Less than 4 minutes later he'd raised his buy price to exactly 0.01 ISK higher than mine. 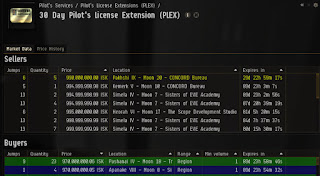 The next cut took even less time for him to respond.

I waited more than 15 minutes before cutting again, it only took 58 seconds for him to respond this time. That's pretty much standard operating procedure for him, the first cut might take 4 or 5 minutes before he responds but subsequent cuts are responded to even more quickly, usually less than 1 minute, regardless if I wait 5 minutes or several hours between my own cuts.

I could put buy orders up on many other things, many different faction mods (sisters launchers for example), most popular ships (including almost any T2/T3 ship) and the same thing will happen. Practically anything that's worth very much, is popular and sells reasonably well. He'll cut it within minutes.

To put it all into perspective, in Genesis roughly 20 PLEX sell every day. That's 600 PLEX a month and the bot gets virtually all of them. Sell orders are generally at least 20 million over buy orders and sometimes 30, 40 or even 50 million higher. With half decent faction standings that's at least 10 million profit per PLEX. 600 PLEX at 10 million profit each is 6 billion ISK.  Even if half that 600 is buys and the other half sales, that's still 3 billion a month profit.

And that's just the minimum profit on only one of the many hundreds (possibly thousands) of items his bot has been controlling for years.
Posted by MoxNix at 14:22 No comments:

After a fairly lengthy hiatus playing UT4 pre-alpha, I logged back into EVE again some 36 hours ago. All but 2 accounts had expired and one of those was about to expire in a few more hours. I burned a few PLEX re-activating several accounts and reactivated all but one of the rest the next day (today).

So I'm back for now though uncertain for how long.

It's been almost 3 full months since the last time I logged on so nearly all of my buy and sell orders had expired. I was surprised to note my net worth hadn't dropped very much at all. In fact it was up slightly until I burned those PLEX reactivating accounts.

So with plenty of ISK burning holes in my pockets I decided to do things a little differently this time.

First I put up buy and sell orders for PLEX in most empire regions. Then I went to work on the new part, the market raider with hundreds of billions to spend buying up low priced stock and resetting prices higher. 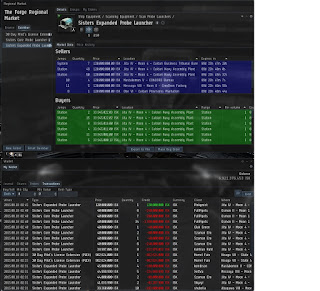 Of course prices won't stay that high for long but I sold 3 at that price which represents a profit of 75 million each on 3 of the ones I paid 45 million for. That's 225 million in total profit on just 3 sales, enough to more than cover the 13 I paid more than 40 million for with another 100 million or so profit left over.

Then I sold another 20 or so for 60-65 million each. At least 20 million profit on each of those for about 400 million more profit. So another 500 million plus to cover "overpayment" on the ones I paid between 35 and 40 million for. That covers at least another 100 I "overpaid" for, the price is still over 46 million right now and I'll still be making decent profits even if the price drops well under 40 mil.

It'll be interesting to see what happens next. A lot depends on what kind of stockpiles others have been holding onto. Maybe the price will go back up again in a day so, or maybe it'll drop low enough I'll do another buyout to put even more pressure on the market.

I'm mostly doing this to shake things up and see what happens. So far it's looking like I'll be making ISK and maybe a lot of ISK.

Oh yeah... It didn't take the Malma bot long at all to respond to the 3 new buy orders I placed in Genesis yesterday. The only 3 buy orders I have up in Genesis period right now. For 3 months I didn't even log in once, yet shortly after do log in and post those 3 orders he's right back to cutting me again. Within minutes just like always. I've had enough of him and his shit. He's been getting away with it for years, next post I'm going to disclose his name so everyone knows exactly who the lowlife cheating bastard is.
Posted by MoxNix at 03:59 No comments: