I haven't posted a financial report in a couple months because I haven't really been doing much lately. It took nearly two months to make what I usually make in one but I finally broke 800 billion over the weekend... Blew it away in fact! 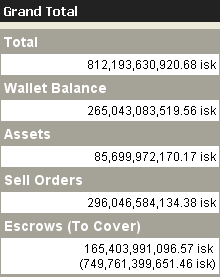 Normally I spend an hour or two a day (on average) working the market for 30-40 total hours a month. When I do that fairly consistently (without skipping too many days) I make around 50 billion per month after expenses (with expenses of 10-12 billion per month).

Lately however, expenses have been up a fair bit due to grinding standings for lower broker fees. I've been spending billions buying pirate tags for Data Center mission turn-ins for faction standings and paying TSCA to grind specific corporation standings for me. That costs 600 mil - 1 bil per character depending on tag prices for faction standing and 2.75 bil per character for 0-8 corp standing. Lower broker fees will pay off over the long term but for the short term it's a one time sunk cost reducing short term profits.

More recently PLEX prices have gone up significantly but the increased cost there has been more than offset by the fact that I'm using fewer PLEX (none at all right now) for dual training than I used to. I used to pretty much always have at least 2-4 accounts dual training and sometimes more.

Most importantly though, I've been far less active on the market, spending only 10 or 15 hours at it in Oct and another 10 or so in the first half of Nov. Last weekend though I was almost back to normal and it shows in my bottom line. Total net worth went up by more than 25 billion over the weekend.

Of course that doesn't mean I made 25 billion in profit in just a few days, a lot of that sudden increase was due to stock that had been purchased weeks ago but I didn't get around to transporting and posting for resale until last weekend.

I probably won't continue spending an hour or two a day working the market for much longer though. Unless and until that changes I won't be making 50 billion a month and I won't be posting regular monthly financial reports either.
Posted by MoxNix at 16:35