Yesterday I mentioned noticing all the PLEX blocking orders on Jita had suddenly disappeared.

When I say "Blocking Order" I mean large volume (typically for 100 units) full regional range buy orders that don't seem to be intended to actually buy any PLEX but rather are there simply to prop the price up and ensure it doesn't drop below a certain value.

There were multiple such orders I've been keeping an eye on for close to a year now. They were always there, everyone else overcut those orders which meant the price of PLEX was always higher than in those orders. Very occasionally they'd bump the price up another notch or two, continually forcing the market higher and higher.

Then after CCP Falcon's announcement on 24 Nov 2014 that as of 01 Jan 2015 input multiplying and broadcasting will become bannable offences (IOW, byebye ISBoxers) the price of PLEX started dropping fast and practically every singe one of those large blocking orders disappeared (most of them before the price dropped to the level they were at).

On the 25th the closest thing left to a blocking order was a station range only buy order for 50 at 770 mil each which was more than 100 million less than the blocking orders had been at the day before and for only half the volume.

Then today (the very next day Nov 26th) I found this. 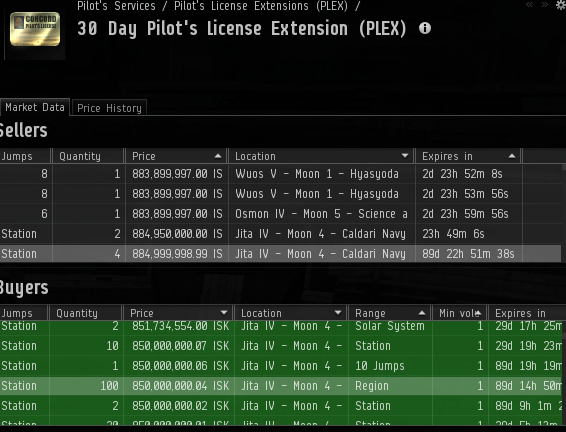 A new full regional buy order for 100 units has appeared at 850 million per unit. It seems someone has decided to try to keep prices over 850 mil. That's pretty much where prices were a month ago before a recent push to raise them to 1 billion.

Chances are pretty good it'll work too. At least for now. The real effect the new policy is going have on the demand for PLEX won't be known until after Jan 1st when the policy actually comes into effect. Any effect the news about it is having on prices right now is purely based on speculation. After some initial panic and knee jerk reactions from speculators, hoarders and price manipulators things are likely to settle down again...

Until the 1st of Jan anyhow, when the real (and lasting) effects of all this will finally be seen.

This is going to affect the entire economy, not just PLEX prices. Ore and mineral prices are already rising in response to the expectation that all those ISBoxed mining fleets are going to be out of business on Jan 1st. Heck I'm even tempted to buy ore now and I never play the bulk materials markets.
Posted by MoxNix at 10:29