The Christmas holiday season usually sees a rise in online gaming activity. More subscriptions are bought, more players are playing longer hours, more items are being bought and sold and there are price fluctuations (both up and down) on many popular items.

In Eve Online one item that's affected by price fluctuations is PLEX. This year buyers went into a bit of a frenzy a few days before Christmas, frantically trying to buy them all up, raise the price and make a killing over the holidays. I don't think they were very successful raising the price (other than temporarily and in out of the way places) but the most obsessive ones probably did pretty good on volume.

Post Christmas, there seems to be a bit of a glut of PLEX on the market, particularly on the buying side. Buy prices have come down a fair bit over the last few days. I've been stockpiling while they're cheap. If you're looking to buy a few PLEX for subscriptions, multiple character training or w/e, right now is a great time to buy! 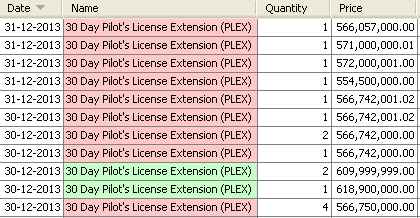 The screenshot above shows my last day and a bit's worth of PLEX sales and purchases. Business for the week before was similar with somewhat higher prices (for both sales and purchases). Obviously I've been buying more than I'm selling but that goes hand in hand with recently bumping subscriptions on all 12 accounts from re-subbing just before they expire to subbing at least 3 months in advance.

I'm also keeping a small stockpile of 10-20 PLEX on hand so I'll never have to "overpay" for PLEX to sub accounts with before they expire again. This also means I have some PLEX handy to take advantage of short lived local price increases in different regions and make better than usual (for PLEX) profits.
Posted by MoxNix at 02:41