Financial report for the month of November 2013 (last month). Trade oriented since trading is how I make virtually all of my ISK.

I buy and sell skill-books, faction/deadspace/officer mods and implants with traders covering all 5 major trade hubs (Jita, Amarr, Dodixie,  Hek and Rens) plus secondary hubs in most other empire regions. I have 23 active traders, 3 on Jita (one each for mods, implants and skillbooks), 20 more with each covering a different region and a few more in training.

In November I made 27 billion after expenses. I spent less time working the market than ever, logging in less frequently and spending less time updating orders too. I changed my inventory up quite a bit, dropping a number of cheaper items from my buy list and buying more expensive stuff (both buying more of the most expensive items I was already buying and adding a number of expensive items to the buy list).

Overall the total number of orders dropped quite a bit (most of my characters have 75 - 100 orders free now) but my escrow went up slightly (about 4 billion). Having more free orders is good, they come in really handy at times, for walling off bots with multiple orders for the same item and for selling off overstock when someone unexpectedly dumps a huge amount of stock on me.

I also sunk another 5-6 billion into getting all my accounts subscribed at least a month in advance (into late Dec or Jan).

Even though that's my lowest total in a quite a while I'm happy with this month. Considering all the inventory changes (making a big push up market usually means lower profits at first), the 5-6 bil ISK that went into subs and how things were looking going into the last week of the month, I only expected to make about 20 bil this month, maybe 25 biil if I was lucky. 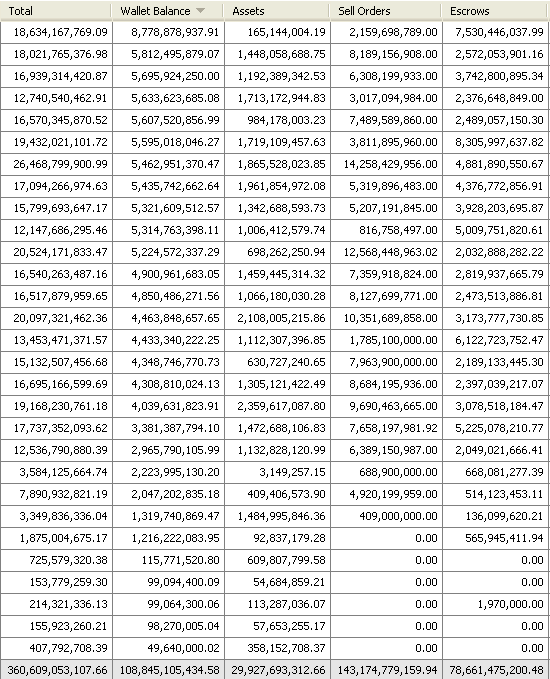 Current net worth is 360 billion with about half in cash and market escrow. Most of the rest is in sell orders and recently acquired stock I haven't gotten around to posting for sale yet.  As I get bigger and spend less time updating individual orders I find myself carrying more and more of my net worth in sell orders. Very little is in assets I don't intend to sell soon, a few ships and some mods I keep in stock for my own use, maybe 4 billion in total.

Note: I initially posted this as a 32 billion profit but later realized that was 5 billion too high due to API call refresh times causing information pulled from the API to incorrectly list a bunch of stuff (mostly PLEX) twice. Just because the API calls are all available for all accounts doesn't mean the info is completely uptodate on all accounts. Especially for the Assets API call on a 6 hour cooldown, it may list the same item(s) as being on the market and still in assets too, or after transferring items between characters as being in assets on both characters.
Posted by MoxNix at 00:00