The PLEX Experiment - Buying and Selling PLEX for Profit

Following up on my last post where I mentioned wanting to be a bigger player in the PLEX market I'm slowly increasing my PLEX market presence in 22 Empire regions. The following is a report analyzing all of my PLEX transactions on the 8th of Jan 2015. 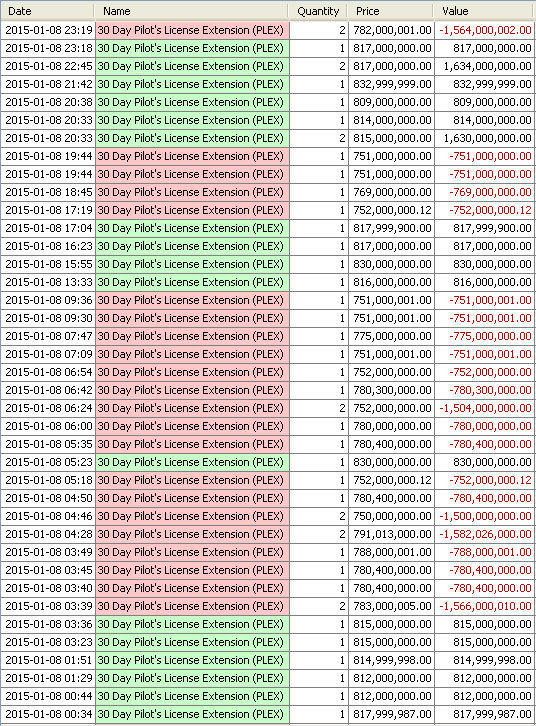 I bought 27 PLEX for a rough average of about 770 million each and sold 19 for an average of more than 815 million each. 815 - 770 = 45 million spread. Assuming my costs to buy and sell 1 PLEX are 15 million each that would represent a profit of 30 million each.  Actually my average cost is less than 15 mil (a bit more on some characters, much less on others), but 15 mil is a nice round number to work with.

Double the volume (50 per day) and it comes out to 45 billion a month.

The big questions are

1. How tight will margins and spreads get as volume increases?
2. Will it be possible to increase volume to 50, 100 or more without becoming a no-lifer and if so just how much time and effort will it take?

Over the next weeks and months, I intend to continue slowly increasing my presence in the PLEX market until I find the sweet spot between volume and profit margins where I make the most ISK without too much effort.

Several of my characters have 0 standings and better standings are definitely necessary to stay in the game when spreads drop under 18 million. I'll have to grind standings on all of those characters and doing it the quick way is going to cost 3+ billion per character.

If the experiment works out really well, I'll probably wind up dropping out of most of my current markets and whittling my list of items down to just the best of my current items (no more than 50, probably more like 25-30 or even less).
Posted by MoxNix at 22:48