This is to show that despite claims to the contrary by a very confused troll, I actually do make ISK buying and selling PLEX. Even in this downward trending market.

In fact I sort of specialize in working downward trending markets, that's where I make many of my largest overall profits. In several of my very best markets I'll even intentionally push the price down, buy in bulk while the price is low, hold stock until the price goes back up and then sell for nice profits.

The following is a screenshot of my most recent PLEX transactions in The Forge region only. For PLEX purchases in The Forge I use full regional range buy orders placed on Jita. 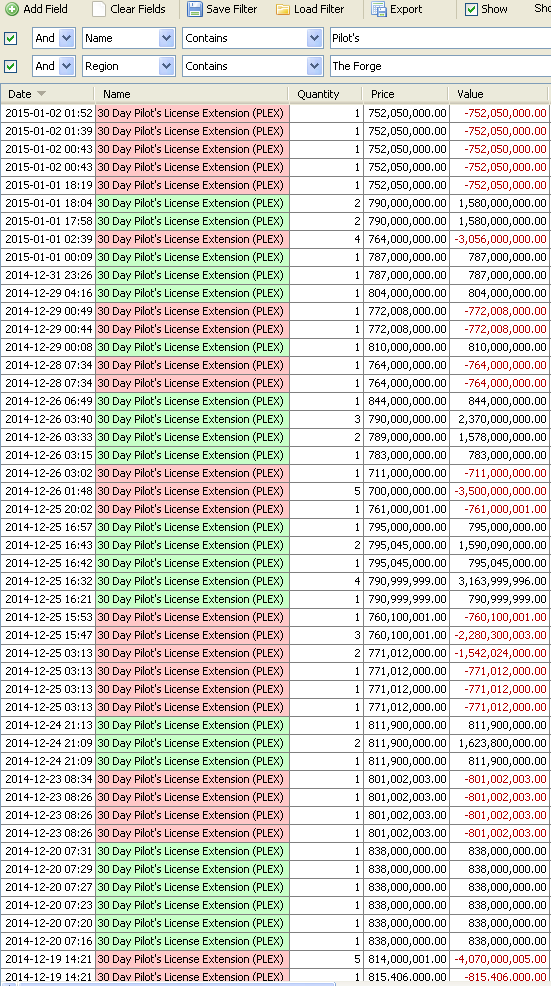 Only transactions in The Forge are shown here. I choose to use The Forge because it has by far the largest sales volume of any region and usually the tightest margins too.

I'm not going to say exactly how much of a spread I need for it be profitable for me (no sense giving my competitors too much intel) but I will say it's closer to 10 million ISK than it is to 18 million (roughly what I'd need to break even with maxed skills and 0 standings).

Transactions aren't FIFO (First In First Out) either. They don't necessarily sell in the same order they were bought in so comparing buy and sell price to each other in order doesn't always work, especially not when the buy and sell orders aren't even in the same region.

I do however usually resell PLEX within 24 hours and usually in the same region they were bought in. Comparing what I paid for PLEX one week to what I sold PLEX for a week later really doesn't mean much.

When I do transport PLEX to another region it's because I have more stock than I can move quickly in one region, little or no stock in the other and sell prices are higher in the region with low/no stock.

But for this screenshot the PLEX were all in the same region and I didn't transport any large numbers of PLEX in or out of The Forge so considering these buy and sell orders to be in FIFO order does give a fairly accurate indication of profitability.

Doing so, one can see there are exactly 4 bought on the 23rd and sold on the 24th that are cutting the margin pretty thin. With a spread of just 10.9 mil those transactions would represent about a 7 mil loss with 0 standings and about 1.3 mil profit with perfect standings.

Simple, not to hide anything, it's just because that's all that would fit in one screenshot.
Posted by MoxNix at 19:44