Imagine my surprise when I fired up JeveAssets a few days ago and saw I'd made 41 billion overnight and 75 billion on the month so far with the month not even half over yet.

Something had to be wrong. There's no way I made that much overnight unless virtually all my extreme lowball orders in several different regions got filled at once and that's just not going to happen.

Then I noticed this. 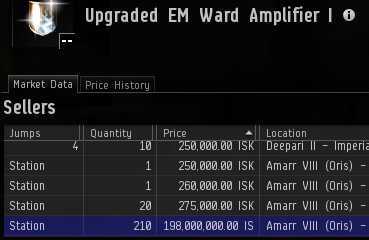 A few hours later someone actually bought one at that price which mitigated most of the loss incurred.

If anyone really wants to know the name of my Amarr trader this is your big chance. All you have to do is buy one of my Upgraded EM Ward Amps too. =)
Posted by MoxNix at 20:28

Email ThisBlogThis!Share to TwitterShare to FacebookShare to Pinterest
Labels: Blunders