Financial report for the month of February 2014 (last month). Trade oriented since trading is how I make virtually all of my ISK.

I buy and sell faction/deadspace/officer mods, ships, skill-books and implants with traders covering all 5 main trade hubs (Jita, Amarr, Dodixie,  Hek and Rens) plus secondary hubs in most other empire regions. I have 23 active traders, 3 on Jita (one each for mods, implants and skillbooks), 20 more with each covering a different region and a few more in training.

February is the shortest month of the year and I didn't spend very much time working the market this month but my net worth was still up 29 billion after expenses.

I decreased the amount of time I spent working the market again this month. In February I only spent about 10 hours in total and less than 2 hours before the 17th. That's 5 or 6 times less work than last month but I still made 58% as much. Not bad at all, especially not when considering I used over 7 billion worth of PLEX on subscriptions this month and 0 last month.

A lot of my business (probably over half my monthly profits) is now in playing longer term trends on a fairly small number of high volume (relative to the price), high priced items. Those items tend to perform similarly whether I post and update their orders once a week, once a day or even several times a day. My business in those items doesn't drop off very much when I spend less time working things though the business in just about everything else does drop off significantly. 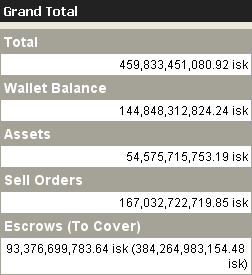 Current net worth is 459 billion with about half in cash and market escrow. Most of the rest is in sell orders and recently acquired stock I haven't gotten around to posting for sale yet. Very little is in assets I don't intend to sell soon, with maybe 4 billion worth of ships and mods I keep for my own use and a small stockpile of PLEX worth another 5-10 billion.

That's my actual current total net worth, I don't pad the numbers by talking about profit made before expenses, adding that up as a running total and only mentioning expenses as an afterthought. My numbers are (and have always been) my actual current net worth after expenses.
Posted by MoxNix at 09:20