As regular readers here must know by now, I've been monitoring and dabbling in the PLEX market for a long time. The last few months and especially since the announcement of the forthcoming multiboxing policy changes coming on 01 Jan 2015 I've been watching it a bit closer than usual.

IMO everything we've seen so far since that announcement is entirely based on speculation, the real and lasting effects of the policy changes won't be seen until after Jan 1st when the new policy actually goes into effect. Then there will be chaos in the markets (not just PLEX) and it'll probably take at least a month or two before things settle down enough that we can predict future PLEX demand and pricing with much confidence.

When news of the forthcoming changes first went public (or even slightly before) there was a sudden sharp drop in the price of PLEX. Some panicked and dumped PLEX, others tried to buy it all up while the price was down. Since then the price recovered somewhat and seemed to be slowly rising up again. Margins tightened up, there wasn't much profit in buying and reselling PLEX.

Figuring that was just the start with plenty of action left in the PLEX market before this is done yet, I put up guard orders on PLEX in 21 regions, sat back and waited to see what would happen next. Then today several guard orders in the high 700 mil to low 800 mil range got filled.

For example on Jita...

I did some checking on EveMarketData and found the buy price had dropped back into the low 800s just about everywhere, even lower in some places.

Here's a graph of PLEX prices on Jita over the last 3 months. You can see the big drop after the announcement of the policy change, a small recovery after that, followed by the start of another drop. 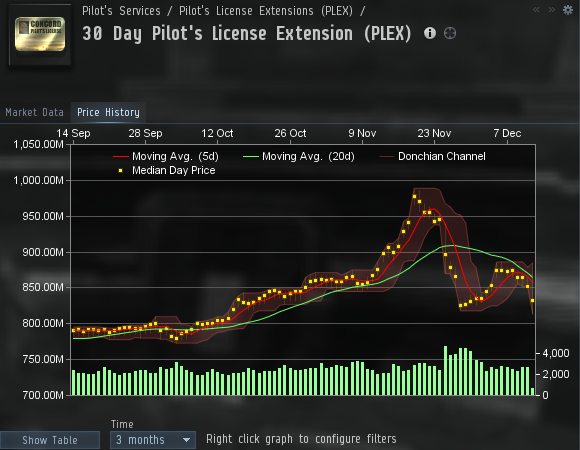 I still say we're due for a lot more chaos in the markets before this all done. In the end this is going to affect everything from PLEX, to mining and minerals, industry and trade. Nobody knows for sure exactly what's going to happen. We'll have to wait for Jan 1st to see what happens and even longer to know how it's all going to shake out in the end.

This is not bad news for traders, quite the opposite in fact, it's great news! Times of change are when ISK making opportunities abound and the more chaos there is the greater the opportunities are. Those who expect and anticipate chaos, are ready and willing to take action when it happens, stand to make fortunes.
Posted by MoxNix at 00:48