Expanding on my previous post about Making Public Courier Contracts Work For You, here's an example of a contract I sent yesterday that proves a number of points about public courier contracts. 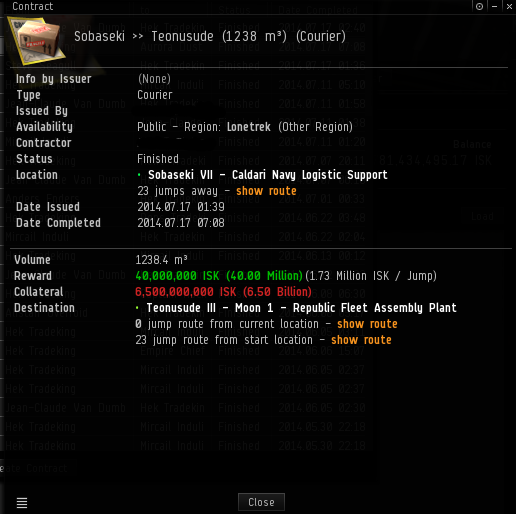 Though it was a very valuable contract between 2 secondary hubs it was still picked up and delivered in less than 6 hours. Also note this was during the wee hours of the morning when the least players are on.

At 6.5 billion collateral, it's the most valuable courier contract I've ever made. In the past I always limited my contracts to a maximum of 5 billion collateral because I felt more might be too much for most couriers to risk. This time I decided to test that assumption and went well over my usual limit.

I intentionally sent it from Sobaseki rather than Jita to illustrate that contracts don't have to originate on a main hub to get picked up and delivered quickly.

I paid 40 million to have 6.5 billion collateral contract delivered.

Red Frog Freight would have charged 17.4 million for the same trip with only 1 billion collateral. 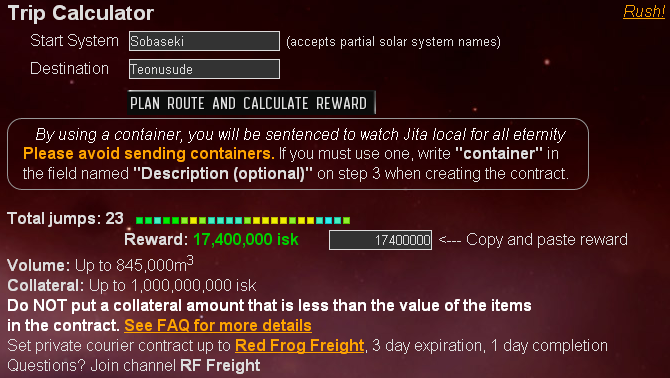 For a rush job RFF would have charged 108.75 million, more than 5 times over their usual rate and still with only 1 billion collateral.

Sending 6.5 billion collateral via RFF non-rush contracts would have required 7 contracts totalling 121.8 million. More than 3 times as much as I paid.

Going with Red Frog's sister service Blue Frog Freight would have been even worse costing 125 million for 5 billion collateral (their maximum) with longer completion (3 days vs 1) and expiration (7 days vs 3) terms..

By going with a public contract I saved more than 80 million in shipping fees over what using RFF would have cost and it got delivered more promptly too.

Here's another example of an older public courier contract with a low sec destination. 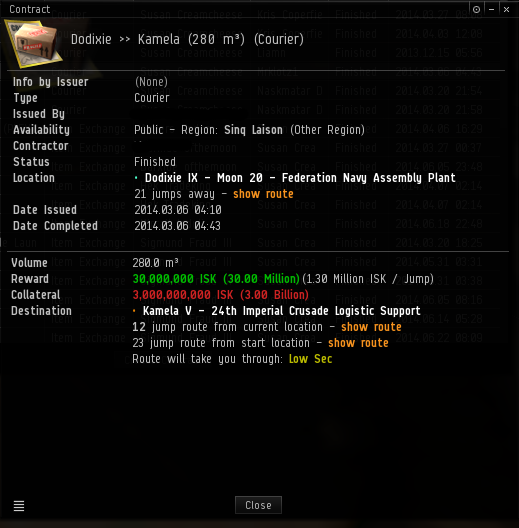 This one got delivered in just 33 minutes! Black Frog charges 95 million for a similar contract with longer expiration and completion terms.
Posted by MoxNix at 15:37