Financial report for the month of June 2014 (last month). Trade oriented since trading is how I make virtually all of my ISK.

I buy and sell faction/deadspace/officer mods, ships, skill-books and implants with traders covering all 5 main trade hubs (Jita, Amarr, Dodixie,  Hek and Rens) plus secondary hubs in most other empire regions. I have 24 active traders, 3 on Jita (one each for mods, implants and skillbooks), 2 in another region, another 19 each covering a different region and a couple spare traders that are not actively trading.

June was a slow month for me, I didn't do very much but I still made a profit of 43 billion after expenses. 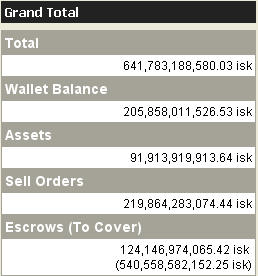 Current net worth is 641 billion with roughly half in cash and market escrow. Most of the rest is in sell orders and recently acquired assets I haven't gotten around to posting for sale yet. Very little is in assets I don't intend to sell soon, with maybe 5 billion worth of ships and fittings I keep for my own use.

The last several months I've significantly increased volume on ~20 high volume items and been playing longer term trends while spending less and less time at it every month. That's been working so well I'm considering concentrating on 20 to 40 items in even greater bulk, spending very little time at all on the rest and probably eventually dropping out of much of the rest completely.

The roughly 20 high volume items I'm working now are performing extremely well. There are at a least another 20 items that should perform similarly though with all the no-lifers and bots currently working those items it'll take a fair bit of work to inhibit their manipulations enough that prices begin to normalize and profit margins finally settle down to reasonable, reliable, steady levels.
Posted by MoxNix at 14:14