PLEX prices have been climbing and climbing ever since they were introduced. A while back I predicted PLEX prices could only go so high and would eventually hit a level where they'd be too expensive, demand would drop and prices would drop. I predicted that would happen before prices hit 1 billion ISK and if prices went too high prior to dropping they could crash hard.

The last month or so I've been seeing indications a price correction was beginning.

I've had a number of "guard" buy orders set up somewhat lower than the going price in various regions for some time. When those orders started getting filled (around a month ago) I knew something was up and started paying closer attention to the PLEX market. For more than a month I've been getting some pretty good deals on PLEX purchases and it seems to be picking up steam lately. 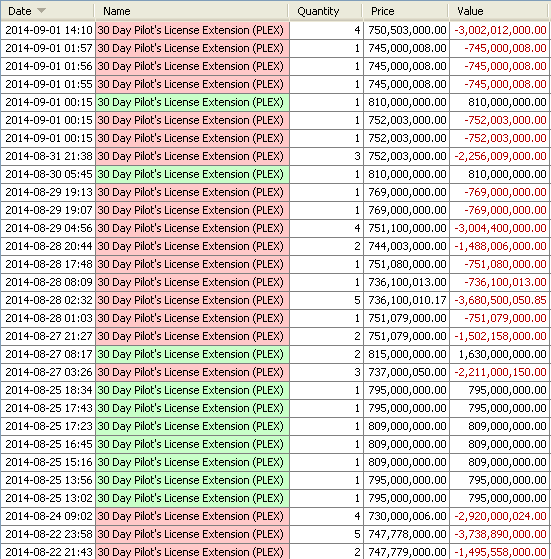 Lately the frequency with which my buy orders get filled seems to be increasing.

During the same time period the price of PLEX on Jita started going down on almost a daily basis, refusing to go back over 800 million and mostly staying in the 770-780 range. There was a brief rally where the price went back to slightly over 800 million (probably a failed attempt at price manipulation) but it didn't stay there for very long at all and was quickly right back down around 770 mil. 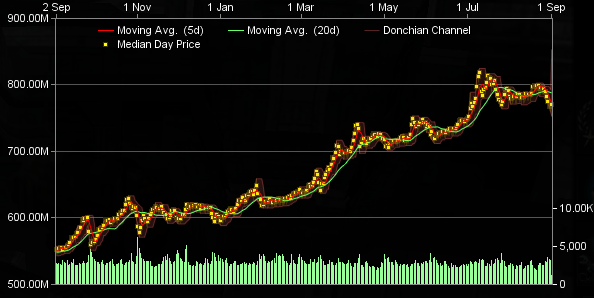 I believe we are now on the verge of a PLEX price crash. The big questions are will it actually crash and if so how hard will the crash be?

Then there's the question of a possible likely Somerblink connection.

I've long suspected someone was continually manipulating PLEX prices upwards and Somerblink was an obvious suspect. They had plenty of reasons to drive the price of PLEX up and keep it up. At any rate someone certainly was putting up quite large buy orders (100 on Jita, 50-100 on the other main hubs and 20-50 on most large secondary hubs) that didn't seem to be there to actually buy PLEX but rather to get overcut and continually push buy order prices higher.

Someone with very deep pockets (deep enough to make me look like a pauper) seems to have been manipulating PLEX prices for a very long time. Is it just a coincidence PLEX prices started dropping and those large buy orders began slowly disappearing right after Somer got shut down?

I think not. I believe Somer had been manipulating PLEX prices upwards all along. Without them around continually pushing the price up anymore, it's probably going to crash now.
Posted by MoxNix at 10:35