For quite some time I've been saying the price of PLEX is bound to drop eventually. It's a bubble being pushed higher and higher by speculation and manipulation but that can't go on forever. Eventually it will drop and the higher it goes before dropping the further it will drop.

It might even crash hard, maybe even comparable to the real life gold crash of 1980.

The pundits keep telling me I'm wrong, the price of PLEX will always go up, any downswings are temporary and caused by the latest PLEX sale.

Yet I continue to see indications PLEX prices are on the way down. 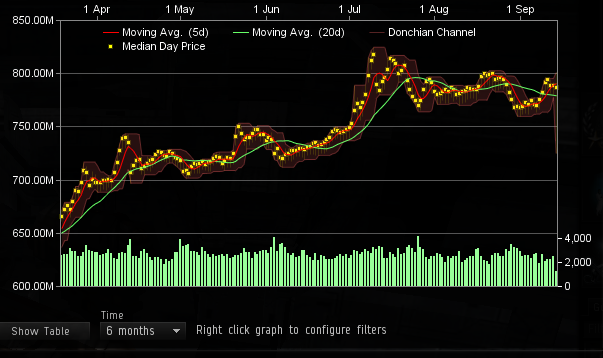 The screenshot above shows the history graph of PLEX prices for the last 6 months on the Jita market. It's obvious the price has plateaued and dropped somewhat since early July. There have been a few price rallies but each rally has soon been followed by another drop. The price keeps going down.

I've also noticed particular orders that seemed to be there strictly for the purpose of price manipulation (keeping the buy price high that is) have been slowly disappearing. If they ever all disappear, particularly on Jita and the other main hubs, the price of PLEX will start dropping faster.

As an example, here are my PLEX purchases over a 6 hour period last night.

Both buy orders were completely filled (one for 6, the other for 5). I just wish I'd made them larger, particularly the one at 704 mil.

As far as I can tell someone big who was manipulating the price of PLEX to keep it high seems to be dropping out of that game. My guess is that someone is Somer.

Sure someone else could and very well might step up and start doing the same thing. The question is, is there anyone else with a big enough vested interest in keeping the price of PLEX high to sink trillions of ISK into doing it for little or no profit?

Somer undoubtedly had plenty of reason to keep the price high, *even if doing so cost them ISK. In fact the scheme that got them shut down in the end proved beyond a doubt they were perfectly willing to do that.

But who else has both the resources and the motivation to do the same?

Nobody I can think of, except maybe some of the largest corporations and alliances with huge memberships and PLEX sales affiliate links of their own. But I don't think any of them could generate anywhere near the number of affiliate link clicks and subsequent volume of PLEX sales that Somer could.
Posted by MoxNix at 10:32