Since my Caldari standings grind on the main Jita trader is stuck on broken data center missions I decided to do the opposite faction data center grind on another trader. My Hek trader was the next one to finish training Social V and Connections IV so I did him next.

The standings that matter for Hek broker fees are Minmatar Repulic faction and Boundless Creation corporation. Starting from standings of 0 / 0 I did all of the Minmatar and Gallente Data Center missions and wound up with the following standings. 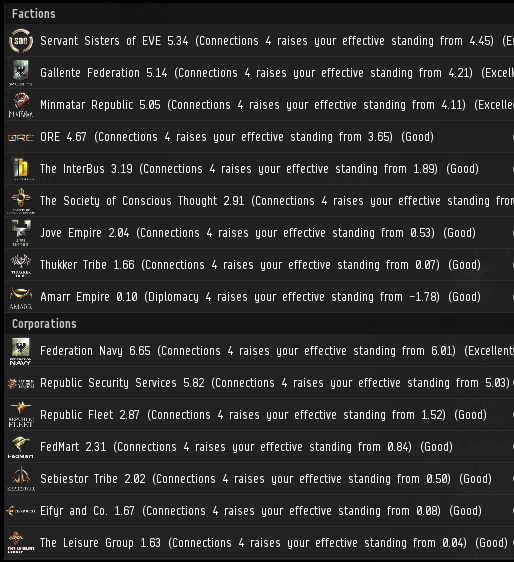 I was stuck briefly on the last 3 Minmatar missions. I had 3.12 unmodified with Republic Security Services and needed about 4.05 unmodified to get the 5.0 modified I needed to access the last 3 agents.

I contacted TSCA (The Standings Correction Agency) and arranged to have them grind me to 4.05+ for 281.5 million ISK. It took about 2.5 hours (with me AFK the whole time). Then I turned in the last 3 DC missions.

I'm extremely happy with the service TSCA provided and will almost certainly use them extensively in the future. They were prompt, courteous and professional, it was a pleasure dealing with them. 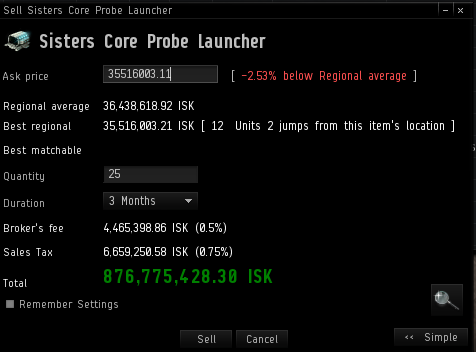 After that I might run some distribution missions or run some Cosmos missions and/or the SoE epic arc. The combat missions would require bringing along a dps alt or paying someone to dps for me.

Other than the minor hitch with RSS standing I had no problems with the Minmatar/Gallente grind. I was able to complete all of the missions. The actual Data Center missions themselves took about an hour to complete, including travel time, time spent doing the courier missions and buying tags.

It's interesting to note I gained a lot of derived SoE faction too. In fact SoE standing wound up the highest of all, more than with Minmatar or Gallente. For anyone looking to grind SoE standings this is a great way to get over 5.0 modified very quickly. Provided you're willing to shell out around 600 million for all the tags and don't mind the corresponding drop in Caldari/Amarr standings.
Posted by MoxNix at 06:00