I mostly dabble in the PLEX market, moving in when markups are at 30 million plus and dropping out when they're under 20 million. That usually works out to 3-7 days of good business before margins drop under 20 million again.

Usually I wind up buying and selling around 100 PLEX per month at an average profit of about 15 million per unit or about 1.5 billion per month. I want to increase my presence in the PLEX market and start playing the low margin segment of the market (particularly on Jita) more.

The problem is markups (especially on Jita) are often around 15 million which would be a loss of 3 million per unit with an 0.75% broker fee. I need to get my broker fee down to 0.25% to really make trading PLEX in greater volume viable on Jita. I'm working on that (already have it down to 0.50% and expect to hit the target 0.25% in another 1-2 weeks.

Lately I've been playing the PLEX market more than usual. The last week or so I've been buying and selling 20-30 PLEX per day, mostly at a markup of 30 million plus. For example here are my PLEX sales and purchases since yesterday. 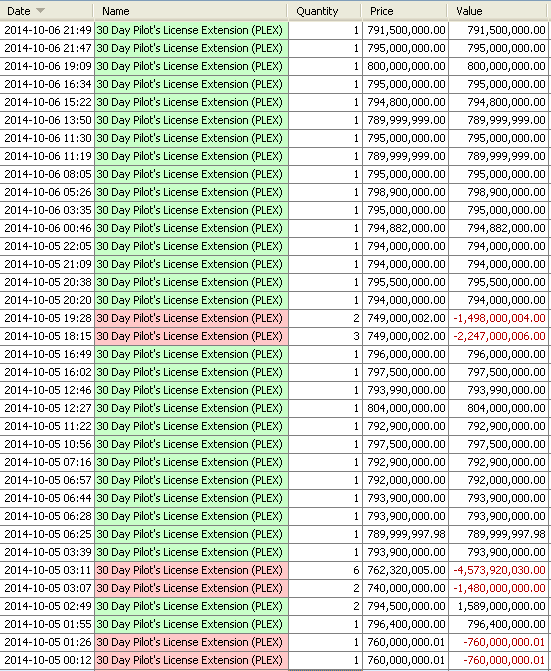 That's 30 PLEX sold and 15 PLEX purchased. But none of them were on Jita where the real volume market is. In fact margins on Jita have been pretty consistently under 20 million for the last month or two so I've hardly done any business in PLEX on Jita lately. It's not much better on the other main hubs either, most of this business was done somewhere other than Jita, Amarr, Dodixie, Rens or Hek.

In the last week, I've bought about 200 PLEX for an average of less than 760 million each and sold them for an average of at least 795 million each. With an average markup of about 35 million and average profit close to 20 million each, that's nearly 4 billion in profits. That's a pretty high markup though, I don't expect to be able to do that all the time. Not even away from the main hubs where virtually all of this business was done. In fact margins are already getting tighter, they'll probably soon be around 20 million again in most places.

The PLEX market seems to have reached a point of resistance in July. People keep trying to drive the price over 800 million and occasionally succeed for a few days before it drops back down again. About once a month there's a big drop and it seems to drop a little lower each time that happens too.

I tend to be a stabilizing influence in the Eve markets. Whenever I make a serious move to capture volume in a given market profit margins tend to drop quickly, spike up and down for a while and finally stabilize at a lower (often much lower) level. Depending on the particular market involved overall price levels might go down significantly too (sometimes so low others call it a crash).

I'll be making a big push into the volume PLEX market soon. It'll be interesting to see how my push and the existing downward price trend interact. Maybe that crash I keep saying could happen will happen.
Posted by MoxNix at 17:57