Financial report for the month of October 2013 (last month). Trade oriented since trading is how I make virtually all of my ISK.

I buy and sell skill-books, faction/deadspace/officer mods and implants with traders covering all 5 major trade hubs (Jita, Amarr, Dodixie,  Hek and Rens) plus secondary hubs in most other empire regions. I have 20 traders in total, 3 on Jita, one each for mods, implants and skillbooks, the rest covering 17 different regions.

In October I made over 29 billion after expenses. I spent less time than usual working the market. Pretty decent, considering Oct has been a slow month for sales with prices dropping radically on a number of items.

On the other hand, big price drops and the resulting losses aren't a big problem if you handle it right and act quickly. Just take the hit and lose money on 1, then make ISK on the next 10 bought cheap when most of the competition bails out because prices are low. They're stuck with capital tied up in stock they can't move at a profit and are reluctant to let it go at a loss while it's still just a small loss. 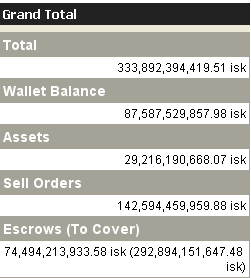 Current net worth is 333 billion with about half in cash and market escrow. Most of the rest is in sell orders and recently acquired stock I haven't gotten around to posting for sale yet.  As I get bigger and spend less time updating individual orders I find myself carrying more and more of my net worth in sell orders. Very little is in assets I don't intend to sell soon, a few ships and some mods I keep in stock for my own use, maybe 4 billion in total.

Three blog posts in one day, that's a record for me!
Posted by MoxNix at 15:10