New Major Secondary Hub - Or Not?

Right after Rubicon dropped Hageken in Lonetrek suddenly jumped from 20th place to first place on EveMarketData's regional station ranking list. The number of orders remained about the same but the value of the orders rose by nearly 8 times.

Naturally I was curious what was going on.

Did Hageken actually become the largest hub in the region overnight?
Did it have anything to do with the new Customs Offices and/or PI market manipulation?
Did someone buyout a bunch of stuff on the station and relist it for 10x more?

After spending a few minutes going through the evemarketdata list I found a single item listed as "Unknown Type" priced for "sale" at 150 billion ISK.

That explains it. Hageken didn't suddenly become the largest hub in Lonetrek overnight. It's probably just one of the new items extremely overpriced at 1000 times or more over it's real value. Maybe a Stratios he's hoping someone who actually has 150 billion in cash on a single character (I don't) will misread and think is priced at 150 million?

There is someone in Lonetrek who likes pricing a lot of things at 10-100 times the usual going rate. For example he really likes posting stacks of Connections (Security, Mining and Distribution) books on Sobaseki for 290-300 million each which is roughly 10x the usual going rate in sell orders.

Or maybe it was just an expensive mistake, the posting fee was probably a billion or more (1.125 billion at 0.75%).

A quick update on the PLEX market venture, here's one day's worth of business. 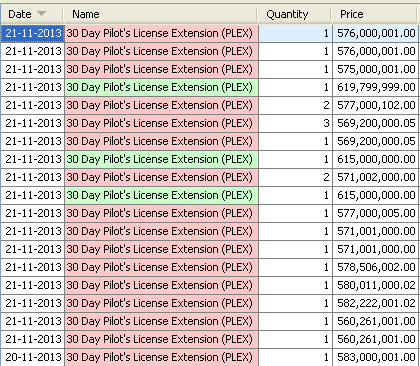 It was a pretty good day for buying PLEX. I bought another 10 the next day too.
Posted by MoxNix at 00:14