I keep hearing about various different "bulk trade" channels and mailing lists. I never really bothered checking into them before because I'm not interested in buying huge piles of materials or really big stacks of cheap stuff. I deal almost exclusively in expensive items like faction mods and implants.

Recently however I ran across some comments about a rich player X ATM#### who's supposedly the biggest buyer and seller of bulk faction mods (or claims to be anyhow). That definitely got my attention since I'm pretty big in faction mods myself. It's always nice to know who the competition is and what they're up to.

So I did some quick Google research and discovered he does most of his purchasing by soliciting private contracts through an in-game mailing list. 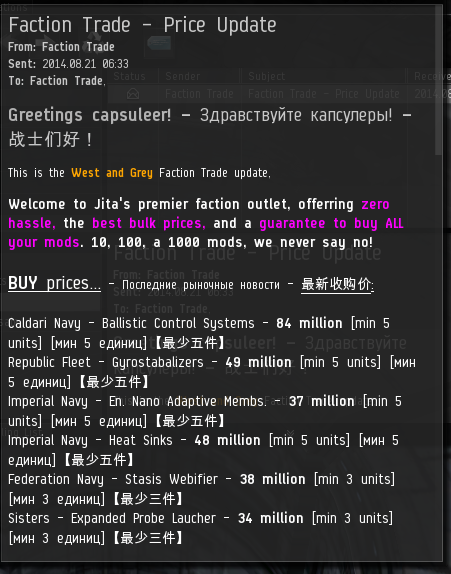 I was a little surprised to find they consider a stack of 5 to be a "bulk" sale, especially for the cheaper items. I was expecting bigger numbers than that. I don't consider myself a really big player in the faction mods market but I can (and do) easily handle much larger purchases than that.

And the best bulk prices? I dunno about that. While their prices are similar to mine on 2 of the above items I pay significantly better for the other 4 items. I buy a lot more than just 6 items and I buy just about everywhere in 21 different regions, not just on Jita.

I also found some talk from X about routinely doing 10 billion a day in business. I can easily handle that kind of volume too. In fact I do that kind of business already, only with a lot of shipping required to get things from where they were purchased to where I want to sell it.

I also found a few other bulk trade lists that allow anyone to post WTB / WTS requests. The biggest was named "Bulk Trade" but for some reason it tells me "You're not allowed to join this list". I'm not sure why, maybe it's full (I hear in-game mailing lists are limited to 3000 members) or maybe the list owner has banned starter corps (all my alts are in starter corps). The other bulk lists I found all seemed dead or nearly so.

If people actually sell significant numbers of faction mods to X ATM and his partner(s) at those prices maybe I should start a bulk trade mailing list too. Only I'd accept contracts on 22 different hubs throughout contiguous hi sec (one hub in each region) and allow other traders as well as industrialists, FW LP farmers or whatever to participate with WTB / WTS offers too.