Financial report for the month of July 2014 (last month). Trade oriented since trading is how I make virtually all of my ISK.

I buy and sell faction/deadspace/officer mods, ships, skill-books and implants with an army of 24 traders covering 19 regions in most of empire space (everywhere except Aridia and Solitude). All of those traders are also Blockade Runner pilots, capable of doing their own transport (mostly on autopilot).

July was another slow month for me, I did even less than in June but still made a profit of over 47 billion after expenses. And that's in spite of buying and burning 25 PLEX (more than twice as many as I need to use every month). If I hadn't bought (and used) so many PLEX this probably would have been a record breaking month for me of near 60 billion. 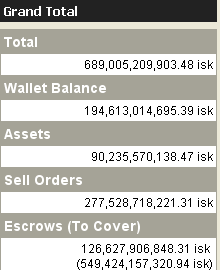 Current net worth is 688 billion with roughly half in cash and market escrow. Most of the rest is in sell orders and recently acquired assets I haven't gotten around to posting for sale yet. Very little is in assets I don't intend to sell soon, with maybe 5 billion worth of ships and fittings I keep for my own use.

After a fairly lengthy hiatus I moved back into the PLEX market near the end of the month. PLEX prices were just getting too high so I'm doing my part to stabilize prices and maybe bring them back down a bit.

The high volume items I mentioned last month are still performing very well though prices are close to all time (since I've been playing anyhow) lows. In fact I attribute a 10+ billion / month increase in profits over the last several months to those items.
Posted by MoxNix at 10:21