My main broke 20 million skill points late last month. 20 million is supposed to be some kind of milestone so I figured a post was called for upon my first character reaching the milestone. 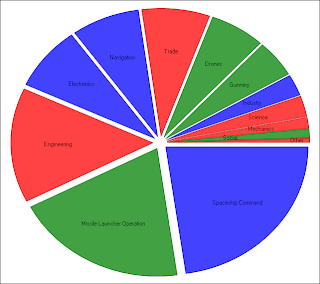 Mox started out as mostly a trader but now he's a pilot flying mainly Stealth Bombers and before that Drakes, hence the heavy investment in Spaceship Command and Missile skills.

Right now he's training Drone Interfacing V with another 16 days to go. He'll likely get Vs in Missile Projection, Rapid Launch and Target Navigation Prediction next. After that it'll be Caldari Cruisers V, Recon and Strategic Cruisers. At some point he'll probably grab Caldari Battleships IV, Gallante Cruisers IV, Gallante Battleships I - IV and Cruise Missiles IV too though those aren't very high priority.
Posted by MoxNix at 13:38