I got ganked yesterday. It's only the second time I've ever been ganked in hisec (on all my characters) and it was the biggest gank loss I've ever had (including losses in low/null). Before anyone asks no it wasn't in Jita.

I was flying on autopilot with a small load of Caldari Navy Heavy Assault Missile Launchers onboard. Nothing unusual, I fly on auto with more valuable cargoes than that all the time frequently.

My route was taking me through Litiura an 0.5 sec system I'd noted was often solo camped by a destroyer. He'd taken shots at me a few times before but his efforts were quite laughable. He'd never come close to killing me, not even when I was afk. So I wasn't too worried about it but I was planning on going manual for the jump through Litiura just to be safe.

Then the phone rang... Since it was work related I had to answer. By the time I got back I was in Litiura, the camper was shooting at me and had me a sliver into hull already. If I'd gotten back just a few seconds later I would have easily escaped but I was too late and he got me. 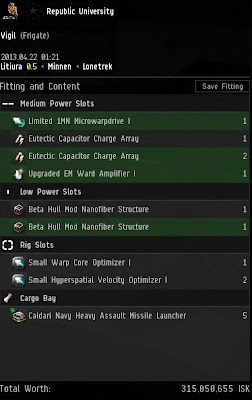 According to the combat report I lost 315 million ISK, however that's assuming the missile launchers are worth over 300 million when in fact I only paid 175 million for them.

With the cost of the ship + rigs (I got the rest of the fittings back) I actually only lost about 176 million though I did also lose the opportunity to make 130 - 140 million profit on the cargo. Barely worth taking the time to pick them up, I almost left them for the next day.

Whether you count it as 176 million or 315 million, it's still just a small loss for me and won't cause me to change my routine. Considering I've only been ganked in hisec twice (in total on all my characters) in over a year and didn't lose very much either time (the first was for about 75 million) I'm not at all worried about it. I make more in a single day than I've lost to hisec ganks the whole time I've been playing Eve (over a year now). That's an acceptable risk I'm more than willing to take.
Posted by MoxNix at 12:48