Financial report for the month of March 2013 (last month). Trade oriented since trading is how I make virtually all of my ISK.

I buy and sell skill-books, faction/deadspace mods and implants covering all 5 major trade hubs (Jita, Amarr, Dodixie,  Hek and Rens) plus several regions that don't have a major trade hub. I play fairly casually and update orders infrequently, often going several days between posting/updating orders. Some characters get updated more often than others and I update sell orders more consistently than buy orders.

In March I made 23 billion after expenses making it my best month yet. 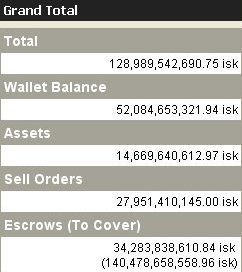 Current net worth is 129 billion with 65% of it in cash and market escrow. Most of the rest is in sell orders and recently acquired stock I haven't gotten around to posting for sale yet. Very little is in assets I don't intend to sell soon, a few ships and some mods I keep in stock for my own use, maybe 2 billion in total.

Tomorrow's post will cover the shocking truth about what I did to nearly double my trading income last month.
Posted by MoxNix at 00:11