There have been some questions about my time management and profits claims lately. How can I possibly make so much ISK with so little time spent posting and updating orders?

Today's post is a short explanation of how it's possible with a few screenshots showing I actually do make the kind of profits I claim. All screenshots were taken on just one of the many stations I operate on. Most of the items were purchased elsewhere and shipped there for better sell prices. 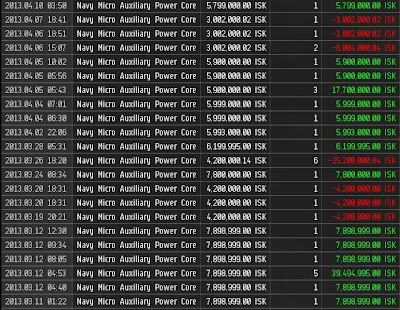 A small number of the items I cover (usually 5-10 items) bring in nearly half my profits (as per Big Head Long Tail theory) each month. Big Head Long Tail theory basically says a small number of inventory items accounts for a disproportionate amount of sales volume and profits. In my Eve business that's mostly relatively high priced items with good volume and profit margins. Which items those are changes constantly due to competition but a small handful of items still accounts for a large chunk of my income each month. I pay far more attention to a handful of Big Head items and work them much more thoroughly than the hundreds of items in the Long Tail.

That doesn't mean it isn't worth working the Long Tail at all though. Here's an example of a Long Tail Item (also taken on the same station as the screenshots above)..

I may not sell a whole lot of each individual item in the Long Tail but many of them are low volume high ticket items with big profits or high volume items with lower but very steady, consistently reliable profits. There are a lot of them and it all adds up. Once you get your prices set right to discourage most of the no-lifers and bots, it doesn't take very much time at all to work them (almost passive income).

Here are a few articles on Big Head Long Tail theory as it relates to real life business.

The Science of Retailing
Chris Anderson
The Misguided Bobbing of the Long Tail
Posted by MoxNix at 15:28

Email ThisBlogThis!Share to TwitterShare to FacebookShare to Pinterest
Labels: Tips and Tricks, Trade